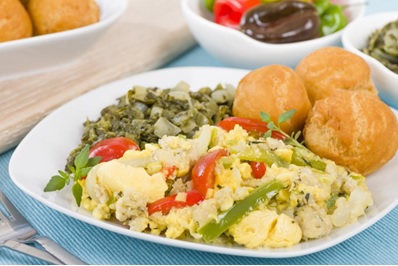 This delightful dish is enjoyed by both Jamaican locals and tourists alike who come to the island and often time see this rare meal for the first time and are astonished by the rich taste and aroma it possesses.

According to an article entitled, “36 Hours in Jamaica” (March 27, 2014) written by Baz Dreisinger in the New York Times, this meal is one which the average visitor cannot afford to miss out on while “hitting the road”, which one will do a lot while on this small but intriguing island. This dish is any food lover’s dream come true.

The ackee itself is a yellow fruit found in an orange – yellow pod. This fruit is member of the Soap berry family of flowering plants along with other fruits such as Lychee and Longan. The fruit was transported from West Africa to Jamaica in 1778 and has been prominent in Jamaican cuisine ever since.

Ackee and Saltfish is celebrated as the national dish of Jamaica. The most popular form of preparation can be found below.

We know about Jamaica beautiful beaches, awesome landscapes, amazing hills and mountains. We know about the warmth of it’s people especially in the hospitality industry….